Check out the Botasaur Buildable Figure! Hands up who has a Rusty Rivets fan in their house? Baby girl is a HUGE fan. So for those of you that don’t know who Rusty Rivets is, he is a hero who uses his imagination and resourcefulness to save the day. Along with best friend Ruby, Rusty repurposes spare parts and other objects he finds to come up with some of the wildest and coolest contraptions around. He welds, screws and makes some awesome builds. One of his first builds was Botasaur, who has become a well-known character and friend.

It’s a fantastic animated series for preschoolers to help capture their imaginations. Whenever it’s on TV my daughter loves to find her goggles, tool box and pretend tools and works alongside Rusty.

Now you can create the Botasaur and bring him to life just like Rusty does in the show! Kids get hands-on as they assemble the parts included to create their own Botasaur. Once built, this iconic character comes to life. Press the button on the back of his head and his eyes will light up and flash as he makes Botasaur sounds! With an expressive face and voice of his own, kids can interact with their newfound sidekick! Requires 3 x LR44 batteries (included). Suitable for ages 3 years and over.

The Botasaur is well packaged, with lots of clips and wire twists to get undone before he comes away from the packaging. It comes with a really useful instruction booklet, which you will need to get the parts the right way around. It does come pretty much assembled. The only parts to put on are the wheels or the slider feet. These are interchangeable parts. The whole thing is quite chunky so perfect for a 3-year-old. If I’m being honest I would like some more of the parts to build from scratch, but from a preschooler’s point of view there is enough to do.

All the parts just snap on, then you pull apart to deconstruct. I do think a 3-year-old would find it hard to pull the pieces apart as it’s quite hard to do.

Botasaur does not come with Rusty Rivets which is a shame, as his seat is all ready for him. All the Rusty Rivet characters and Build Me Rivet System play sets are interchangeable, so if you have the collection they will all fit together. You to can invent your own vehicles or creatures like Rusty.

You can lift up the top of his nose to fit the replacement batteries, but it does come with them fitted. Botasaur’s eyes light up when you push the button behind his head and he makes some really cool sounds. He opens his mouth and chomps.

Overall we think Botasaur is great fun, but would be even better combined with the other Rusty Rivet Build Me Rivet System play sets for a bigger play experience. He is a great starter for a build my own toy. 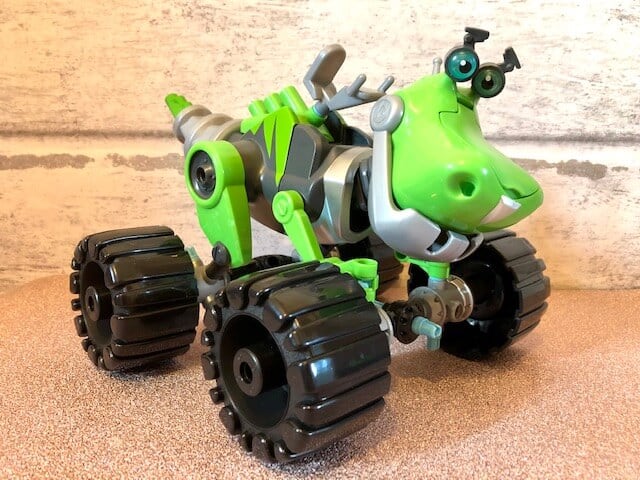 Thanks for stopping by today, I hope you have enjoyed our Botasaur Buildable Figure review.

You can check out our latest toy reviews here.

*We received Botasaur in exchange for this post, all thoughts and opinions are our own.