Today I’m on the blog tour for Hell to Pay by Rachel Amphlett. You may remember a few weeks back I was involved with the cover reveal for Hell to Pay. This time I have an interview from Rachel herself on what motivates her.

Read on to hear what Rachel says.

When sketching out the initial idea for a new story, one thing I try to do is ascertain what motivates each and every one of my characters.

It doesn’t matter if they’re one of the good guys, or one of the bad guys. Everybody has motive for what they do. Something that drives them.

Kay Hunter is obviously motivated to catch the bad guy in each book, but she’s also driven by the need to prove herself to her colleagues and to her superiors. Notwithstanding this, she is incredibly tuned in to the motivations of those around her.

In Hell to Pay, revenge is an enormous motive, but so is obsession.

Although the series is named after Kay, she is only one member of a strong character cast. Her team comprises two detective constables and two police constables, and she reports to a detective inspector.

All these characters have individual motivations that drive them.

Whether that is to prove themselves on their first major incident investigation, or to be seen as an integral part of the team so that once the investigation is concluded they open up new career opportunities, it’s my responsibility to ensure that they get the chance to shine.

When the series started out in Scared to Death, the team had only just been put together by the Senior Investigating Officer, Detective Inspector Devon Sharp.

As the series unfolds and the team’s resilience is tested, the supporting cast also get their time in the spotlight.

Every single one of them matters.

It is my hope that readers will grow to like each and every one of Kay Hunter’s colleagues as much as Kay Hunter herself.

After all, in time those team members may one day have stories of their own to tell…

Hell to Pay is a gripping fast paced crime thriller, and the fourth in the Detective Kay Hunter series:

Here are the other blogs on the Hell to Pay blog Tour. They all have a mixture of reviews and guest posts to share with you. 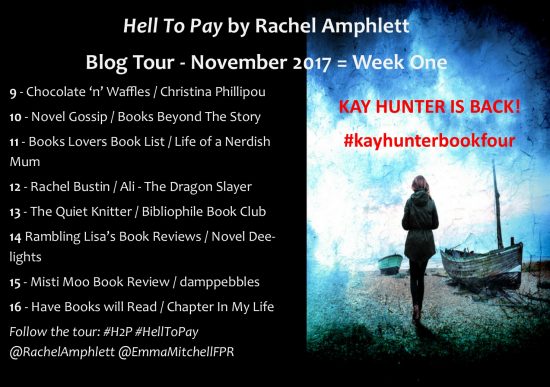 One thought on “Blog Tour – Hell To Pay by Rachel Amphlett”