Today I’m on the blog tour for A Known Evil by Aidan Conway. This time I’m sharing an extract with you instead of a review. I have read the book. Let’s just say you are in for a treat! 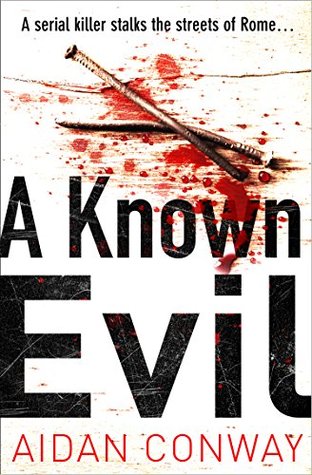 Before I share with you an extract from A Known Evil, here is a little bit about the book:

A serial killer stalks the streets of Rome…

A gripping debut crime novel and the first in a groundbreaking series, from a new star in British crime fiction. Perfect for fans of Ian Rankin.

A city on lockdown.
In the depths of a freakish winter, Rome is being torn apart by a serial killer dubbed The Carpenter intent on spreading fear and violence. Soon another woman is murdered – hammered to death and left with a cryptic message nailed to her chest.

A detective in danger.
Maverick Detective Inspectors Rossi and Carrara are assigned to the investigation. But when Rossi’s girlfriend is attacked – left in a coma in hospital – he becomes the killer’s new obsession and his own past hurtles back to haunt him.

A killer out of control.
As the body count rises, with one perfect murder on the heels of another, the case begins to spiral out of control. In a city wracked by corruption and paranoia, the question is: how much is Rossi willing to sacrifice to get to the truth?

They’d found the body in the entrance to their block of flats where, sometimes, bleary-eyed, they would avoid treading on the dog shit some neighbour couldn’t care less about cleaning up – teenagers on the way to school at eight in the morning. They’d been the first to leave the building, apparently, although it was now known the victim didn’t live in the same complex. Paola Gentili, mother of three, a cleaner, on her way to work. Multiple blows to the cranium. No sign of sexual assault. No attempt to appropriate money or valuables. No sign of a struggle.

So, it seemed she had been taken completely unawares. Better for her. Husband had been informed. Distraught. Had given them the few preliminary details they required without the need for any formal interview. That would have to wait until they got the go-ahead from the presiding magistrate. But the guy seemed clean enough going by the checks the new ‘privatized’ IT system had given them in record time. What social media access she had was regular and only moderately used. Meanwhile, they’d started looking into the other stuff. No particular leads. No affairs. No money issues. No links to known families in the organized sector. Worked in a ministry in the centre of the city. No unexplained calls. Just waiting now on the forensics guys to come up with something more concrete to work with.

Inspector Michael Rossi had only just driven through the gates in the Alfa Romeo. He had known immediately that something big was coming by the urgency of Carrara’s steps as he’d emerged from the baroque archway leading from the Questura’s offices to the car park. If Rossi had bothered to switch his phone on before it would have got him out of bed, what? Twenty minutes earlier? But that wouldn’t have saved anyone’s life. Now, the debris of takeaway espressos and sugar sachets violated the bare desk space separating them in his office. Their own cleaner had just been in, chatty as ever, oblivious as yet to the news.

“Other than that,” said Carrara, “we’re totally in the dark on this one. But it does look like there’s a possible pattern emerging.”

The second such killing in as many weeks. The modus operandi and the victim profile bore distinct similarities but no one had dared yet to use the term. Serial? Was it possible? In Rome?

Detective Inspector Luigi Carrara. Five years Rossi’s junior, several years under his belt in anti-mafia, undercover, eco-crime, narcotics, now on the Rome Serious Crime Squad. Recently married, he had the air of one of those men who never seem to have overdone anything in their lives: hardly a wrinkle, haircut every month, bright, fluid in his movements. Just the man Rossi needed on a Monday morning like this one.

“How similar?” said Rossi, still struggling to form what he considered decent sentences, though his mind was already whirring into action. “The weapon, for instance?”

“A few boys from the local station. They got the magistrate there sharpish though. Hopefully they’ll have disturbed as little as possible. She was carrying ID, so we got to work with that straight off, once the news came in on the police channel.”

“Not officially. But they will.”

“Good. Let’s go,” said Rossi grabbing his battered North Face from the coat stand, feeling more vigorous and even a little bit up for it. “I want to see this one for myself.”

Here are the other blog tour hosts, where you will find reviews, guest posts and more extracts. 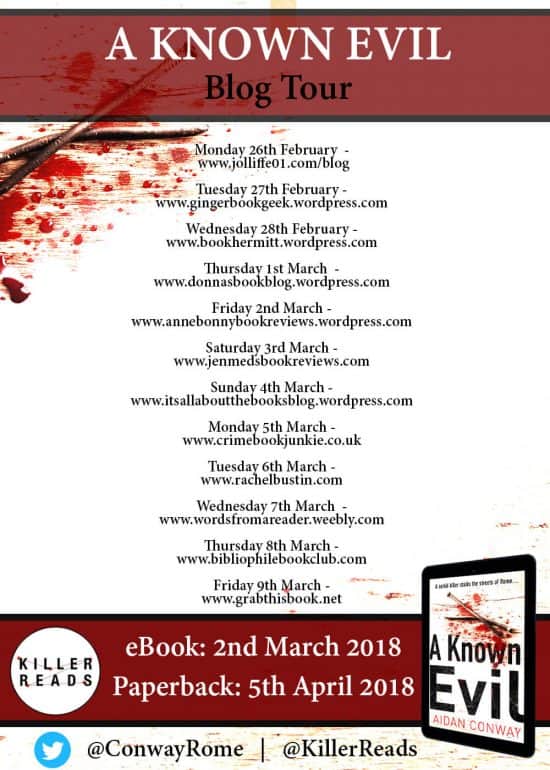 Thanks for stopping by today, if you liked this post you can check out my bookish category!

2 thoughts on “Blog Tour: A Known Evil by Aidan Conway” 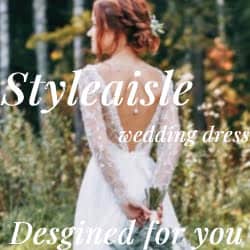