Mum’s are you stuck for what to buy for Father’s Day from your kids?

Have you thought about getting some classic films that he will treasure? Everyone loves to sit down and watch a movie for some me time and these great titles are sure to give that. Rediscover the golden oldies this Father’s Day with Fox.

Here are a selection of oldies recommended:

John Wayne gained his first starring role in this early Raoul Walsh talkie, playing the young leader of a pioneer wagon train travelling across the Oregon Trail. Repulsing Indian attacks and battling against the hostile elements, The Duke still finds time for romance with a fellow traveller

A lighthearted western starring John Wayne and Stewart Granger as rough and tumble gold prospectors in Alaska. When Sam McCord (Wayne) and George Pratt (Granger) eventually strike it rich in the gold rush, George sends Sam to Seattle to fetch his fiancée; but Sam falls in love with her. George eventually accepts his loss and sets about finding a new gal, but only seems to find trouble.

John Wayne stars as Texas ranger Jake Cutter in this classic Western based on the novel by Paul I. Wellman. When Cutter’s path crosses that of professional gambler Paul Regret (Stuart Whitman), the two become uneasy bedfellows in their quest to crush a powerful outlaw gang who are selling arms and alcohol to the local Indians.

In the aftermath of the American Civil War, Confederate Colonel James Langdon (Rock Hudson) prepares to travel to Mexico with his family. When they are attacked by bandits, it is Union Colonel J.H. Thomas (John Wayne) who comes to their aid. The former enemies find themselves united in their efforts to resist Mexican Emperor Maximillian, but when the rebels kidnap the Southerners, Colonel Thomas must decide whether to surrender his valuable herd of 3,000 horses and secure their release, or leave them to their fate.

Clint Eastwood- The Man with No Name Trilogy

Triple bill of Sergio Leone Westerns starring Clint Eastwood as the Man With No Name. In ‘A Fistful of Dollars’ (1964), the laconic gunslinger (Eastwood) makes a financial killing by playing two feuding families off each other in a small southwestern town. ‘For a Few Dollars More’ (1965) sees him reluctantly joining forces with bounty hunter Colonel Mortimer (Lee Van Cleef) to battle psychotic bandit El Indio (Gian Maria Volonte) and his gang of outlaws. In ‘The Good, the Bad and the Ugly’ (1966), set during the American Civil War, the paths of three loners – Joe (Eastwood), Tuco (Eli Wallach) and Setenza (Van Cleef) – cross as they search for the grave of Bill Carson, home to a hidden fortune. As the war intensifies, the treasure seekers become drawn into a battle that dwarfs their own mercenary pursuits.

Steve McQueen stars in this classic war drama based on the book by Paul Brickhill. During World War II, a collection of hardened Allied prisoners are kept in an escape-proof German camp. Led by Big X (Richard Attenborough), the men formulate a plan for a mass breakout, digging three tunnels named Tom, Dick and Harry. 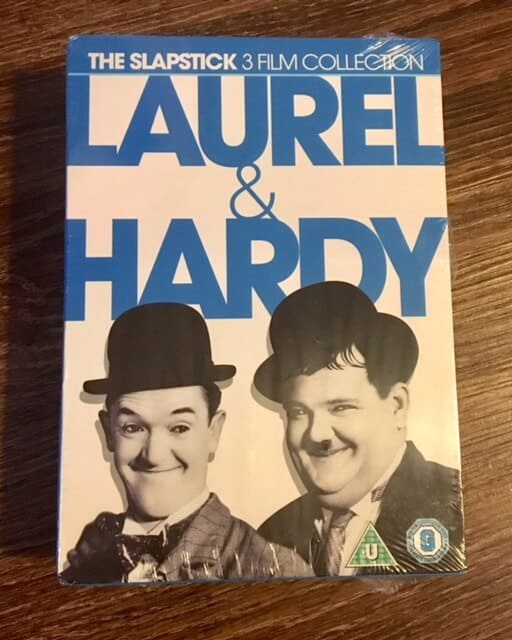 Three classic films starring comedy duo Stan Laurel and Oliver Hardy. In ‘The Dancing Masters’ (1943), Stan (Laurel) and Ollie (Hardy) are owners of a dance school, but are evicted for non-payment of rent. To raise money, Ollie tries an insurance scam which involves inflicting injuries on Stan, but the inept pair soon find themselves mixed up with local gangsters. Watch out for appearances by long-running Marx Brothers’ foil Margaret Dumont and a youthful Robert Mitchum. In ‘A-haunting We Will Go’ (1942), Laurel and Hardy unknowingly offer to help a bunch of crooks smuggle a wanted man past the police in a coffin. Unfortunately, the casket gets mixed up with one used by a stage musician, leading to a comic chase. Finally, in ‘The Bullfighters’ (1945), Stan and Ollie are two detectives looking for a female criminal in Mexico. Stan gets mistaken for a famous matador and is forced to show his prowess in the bullring.

I hope this post has given you some inspiration for what to buy your kids to give their fathers this Father’s Day. Rediscover the golden oldies.

*We received this selection of films in exchange for this post.

One thought on “Rediscover the Golden Oldies this Father’s Day”