I was approved to read and review Our Endless Numbered Days by Claire Fuller from Netgalley ( a place where bookbloggers can request books to feed their readers!).
What drew me to the book was the mystical type of cover and that it was about a little girl living in the woods. This reminded me of old fairy tales like Hansel and Gretel. So I was eager to make a start reading the book on my Kindle.

1976: Peggy Hillcoat is eight. She spends her summer camping with her father, playing her beloved record of The Railway Children and listening to her mother’s grand piano, but her pretty life is about to change. Her survivalist father, who has been stockpiling provisions for the end which is surely coming soon, takes her from London to a cabin in a remote European forest. There he tells Peggy the rest of the world has disappeared. Her life is reduced to a piano which makes music but no sound, a forest where all that grows is a means of survival. And a tiny wooden hut that is Everything. 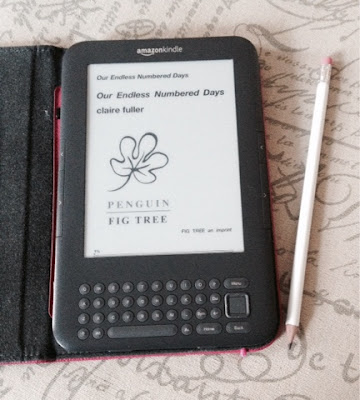 My Review:
The book started off a bit slow for me. The first chapter was set in London 1985 and tells us about someone which I assumed to be Peggy telling her story about a photograph which showed us the last photo of her father before everything happened.
The next chapter goes on to say about her survivalist father ordering stock piles of food and necessities for the basement. Peggy’s mother Ute is a well known German piano player who travels around playing concerts. She is gone when Peggy’s father takes it in his head to take Peggy to die Hutte in 1976, ‘a magical secret place in the forest, our very own little cabin with wooden walls, and wooden floors and wooden shutters at the windows’ is the way her father describes it.  When they finally get there it’s not quite what they hoped for.
The story is well written and describes the area in the woods beautifully. It is a bit slow paced at times which is the only negative for me. Peggy’s father comes cross as a cruel man for bringing her to live in these woods with no other human interaction for 9 years and making her believe that her mother and all other humans are dead.
It is a great debut novel from Claire Fuller and I will keep and eye out for any future books.
I have given Our Endless Numbered Days by Claire Fuller 4 out of 5 stars.
Kindle Edition 304 pages
Published 26th February 2015 by Fig Tree (Penguin)