Well it’s Monday again so time for #BookReviewMondays. I aim to provide you all with a book review each Monday, of a book I have been reading the previous week and finished over the weekend. I seem to have the most time to finish a book on Sunday afternoons. I find it a very relaxing way to end the weekend.
Today’s book review is a book called Exposure by Helen Dunmore. I am a huge fan of Helen Dunmore’s books and this one looked really intriguing, full of mystery, suspense – the perfect spy story.

London, November, 1960: the Cold War is at its height. Spy fever fills the newspapers, and the political establishment knows how and where to bury its secrets.When a highly sensitive file goes missing, Simon Callington is accused of passing information to the Soviets, and arrested.His wife, Lily, suspects that his imprisonment is part of a cover-up, and that more powerful men than Simon will do anything to prevent their own downfall.She knows that she too is in danger, and must fight to protect her children. But what she does not realise is that Simon has hidden vital truths about his past, and may be found guilty of another crime that carries with it an even greater penalty. 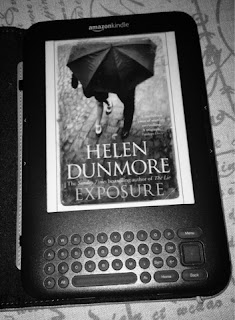 My Review
Exposure is the story of a family man called Simon Callington who works for Admiralty in 1960’s London who one day is accidentally caught up in the missing of a Top Secret file. He is accused of passing top secret information to the Soviets and arrested and put in jail. The story is set at the height of the Cold War, which made it so much more interesting to me. It’s not a very fast paced thriller more of a slow-burner, but very interesting nonetheless.
For me the main and most fascinating character in the book is Simon’s wife Lily. Lily emigrated with her mother to Britain from Berlin as a Jewish refugee before the start of World War 2 and had to learn to adapt to British life, even forgetting her native language German.
Lily is a part time teacher while looking after their three children at the same time. They live in a beautiful house in London and life seems to be nearly perfect for them. Until that night where Simon gets a phone call, and has to go out. Life is about to drastically change for the Callington family.
Exposure is a great spy thriller with an emotional side to it. It’s not your normal fast paced thriller if that’s what you are into, but it gives you great character’s and a beautiful setting. Lily Carrington is one of the best character’s I have read about in a book in a long while.
A highly recommended read. Thanks to Netgalley for providing an ebook early release copy to read and review.
I have given Exposure by Helen Dunmore 5 out of 5 stars.
Kindle Edition 400 pages
Hardback Edition Publication date 28th January 2016 by Random House UK, Cornerstone
Disclaimer: All views and opinions expressed are my own. ebook supplied by Netgalley for purpose of this review only. Book cover image and book description used from Goodreads for purpose of this review only.
Thank you for sharing
#BookReviewMondaysbookbookreviewBooksebookKindlemysteryNetGalley

The Watchmaker of Dachau by Carly Schabowski – Book Review

A Fish and His Friend by Fern Paisley – Review and Giveaway

Are you looking for something?

Are you looking for Freelance Insurance? I’m with Dinghy. Freelance insurance you can turn on or off, up or down. No fees. No admin charges.
Protect your own business too via my page and earn a £25 Amazon Voucher:
https://getdinghy.com/deck/refer/rb-3522
Timeshare resales are great for families who frequently vacation together. They provide a guaranteed vacation in a condo-like resort every year for the rest of your life. A Sheraton Vistana Villages timeshare is always a good choice.