Every so often I love to browse through all the books on bookbridgr to see what new books are out and what I like the look of. Sometimes its very hard not to request to read more than I can handle! It’s always so tempting!
What caught my eye about Dead Ringers by Christopher Golden was not only the cover which contains a weird creepy house (my favourite type of horror books) but also the authors name Christopher Golden, as I have read one of his other novels Snowblind. I was so pleased when Dead Ringers arrived in the post from bookbridgr knowing that I had been approved to read and review it. 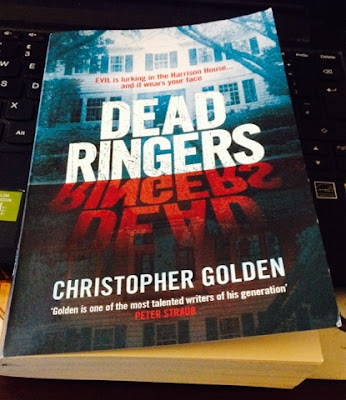 Book Description
When Tess Devlin bumps into her ex-husband, she’s furious that he seems not to know her.

And then Frank Lindbergh is attacked by an intruder in his home … an intruder who wears Frank’s face.

In the heart of the city, a mansion stands on a hill and behind its wrought-iron fence an evil force is at work, leaving everyone who comes near it hysterical with fear.

But the real terror lies inside the house. Tess and Frank have no choice but to confront a mistake made years ago. A mistake that summoned an ancient evil … and means even their own reflections could kill them.

My Review
The book starts off with a really strange prologue with someone breaking into Frank Lindbergh’s house who looks like a mirror image of him. By the end of the creepy prologue I was hooked. Chapter one introduces you to the main character of the book – Tess Devlin and her encounter on the street with a man who happens to look exactly like her ex-husband Nick. From here on Tess’s best friend Lili also sees someone who could be her twin, and Tess herself comes face to face with her doppelganger. At this point I had more questions than answers and this is what I love about a great book!
My first thoughts were, is this book about long lost identical twins being brought together by some mystical force somehow?
I was eager to carry on with the story and find out what was going on and why everyone seemed afraid of the massive house in the middle of the city. How were Tess and Frank connected to it? and how/if they were able to put everything right.
One of the scary things about this book is identity theft, and how is easy it seemed for others to actually think they were talking to ‘Frank or Tess’ and how hard it was to tell them apart from the real people. To me this rings easily with today’s world in how easily innocent people’s identity can be stolen by identity fraud.
Overall Dead Ringers is one creepy, mystical scary story and I really enjoyed the ride. My only negative about the book is that some of the characters were not necessarily needed and we didn’t get to hear all of their background stories. The book is well written and the locations described perfectly.
I have given Dead Ringers by Christopher Golden 4 out of 5 stars.
Paperback Edition 320 pages
Published 3rd November by Headline

The Watchmaker of Dachau by Carly Schabowski – Book Review

A Fish and His Friend by Fern Paisley – Review and Giveaway

Are you looking for something?

Are you looking for Freelance Insurance? I’m with Dinghy. Freelance insurance you can turn on or off, up or down. No fees. No admin charges.
Protect your own business too via my page and earn a £25 Amazon Voucher:
https://getdinghy.com/deck/refer/rb-3522
Timeshare resales are great for families who frequently vacation together. They provide a guaranteed vacation in a condo-like resort every year for the rest of your life. A Sheraton Vistana Villages timeshare is always a good choice.